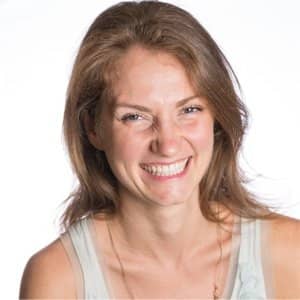 Anna joined the ABHC as part-time Coordinator in 2014. She became part-time Director in 2018 and transitioned to full-time in 2019. As Director, Anna coordinates efforts with multiple community organizations, initiates partnerships, and advocates for the health and wellness interests of Allston-Brighton residents.

From 2014-2019, Anna was also the part-time Director of Development and Evaluation for Union Capital Boston, a non-profit community network of rewards, recognition, resources, and relationships. She chaired the steering committee of Boston’s CHNA, Boston Alliance for Community Health, from 2017-2019.

Born and raised across the river in Cambridge, Anna earned her BA at the University of Montana, Missoula in 2007.  She worked in education in New Orleans before earning her Masters of Public Health from the Colorado School of Public Health in 2012. Anna has received numerous awards during her time leading the Collaborative, including a Community Hero award from Action for Boston Community Development, the Unity and Community Award from The Women’s Table, and the Community Partner Recognition Award from the Allston-Brighton Adult Education Coalition.

She lives in Somerville with her partner and their dog.

Jess proudly joins ABHC with a passion in food access and sustainable agriculture and believes the two go hand in hand to create an equitable food system.  Jess plays a large part in the growth and success of the Brighton Farmers Market, going on her fourth year as market manager.  She has previously worked with Mass Farmers Market, a non-profit that supports markets across the state with a focus on equity and food justice. Other work Jess has been involved with is Red Tomato Inc; a food intermediary for farmers, often known as a food hub.

Jess received a bachelor’s degree in liberal arts from the University of Massachusetts-Amherst in 2010. She also received a Certification in Sustainable Agriculture and Food Policy from the Friedman School of Nutrition and Science and Policy at Tufts University.

Jess lives in Newton with her partner and their pooch, Cooper. Many moons ago she played competitive ice hockey and really enjoys keeping the skating passion alive by searching for beautiful ponds to skate on during the winter.

Ms. Barbour is a Licensed, Independent, Clinical, Social Worker (LICSW) with over 30 years of casework, supervisory, administrative, and program development experience in the field of human services. She has worked in a number of community-based nonprofit and public sector organizations specializing in community-based services for diverse populations.

For the last 25 years, Ms. Barbour has worked in the field of affordable/mixed income housing, as both a staff member of national nonprofits and a consultant/trainer to regional and national real estate management firms and service providers interested in developing and implementing resident service programs. Her experience includes multifamily, senior, special needs, affordable, HOPE VI, and mixed income housing. She has extensive experience as a senior level resident service director overseeing the development, financing and implementation of integrated resident service, self-sufficiency and supported housing programs.

Ms. Barbour earned a Masters degree in Social work at Boston University School of Social Work and has a B.S. degree from Utica College of Syracuse University, Utica, New York.

Helen joined the Allston Brighton Substance Abuse Task Force (ABSATF) in 2006 as the Project Coordinator on a Federal, SAMHSA Drug Free Communities Support Grant based out of SEMC/SECAP. The goals of the grant were two-fold : Reducing Substance Abuse Among Youth and Adults in the Allston Brighton Community and building capacity for a community coalition which includes rep from multiple sectors. From 2006 ? present the ABSATF has established a Youth Coalition, Conducted multiple evidenced based community and city wide prevention strategies and recovery resources including the AB Annual Walk for Recovery. With additional grant funding from the MA DPH, BSAS, strategies aimed specifically at underage drinking and Marijuana prevention have been implemented. The ABSATF has worked with City, State and Federal partners to change community norms around substance abuse, to reduce underage drinking and to prevent Rx Drug Abuse among youth in the Allston Brighton Community.

Helen has a ten year history of working as a nurse at SEMC/ Emergency Department. She was the first Nurse, then Director of Caritas Good Samaritan Hospice (1983-1993). The Hospice is currently part of Steward Home Care.

Born and raised along the Texas-Mexico Border, Claudia attended the University of Texas at Austin where she earned a Bachelor of Science in Communication Studies with a focus in Political Communication and a minor in History. After university, she moved to Boston and fell in love with the harbor seagulls and the snowy winters.

Claudia lives in Allston with her partner and their plants and books. In her free time, Claudia enjoys coffee, candles, and cooking.

Rachel is a lifelong resident of Boston. She graduated from Johnson & Wales University with her bachelor’s degree in Criminal Justice with a Concentration in Psychology and earned her Paralegal Certificate from Curry College soon after. Prior to her work at the CDC, she worked at Rosie’s Place providing direct services to poor and homeless women as the Assistant Advocacy Manager. Rachel has held many roles working in the non-profit sector providing direct support to individuals and families from marginalized populations.

Rachel speaks Haitian Creole, loves basketball, reading, writing, and is very passionate about social justice and human rights. She is excited to be back with the CDC and bring her professional experiences to her neighborhood!

Walae is the Manager for Healthcare Policy at Massachusetts Health & Hospital Association where they focus on behavioral health access and quality. Walae previously worked as an EMT and has over 6 years of experience in healthcare, academia, and advocacy. Her previous research also focused on different behavioral health issues and ways to improve quality care in emergency departments. Their experiences in the field shaped their drive towards building community and advocating for social equity. Walae’s public health background plays a huge role in translating passion for social justice into action. They attended Brighton High School and the West End House Boys and Girls Club before earning a Bachelor of Science (BSc) in Behavioral Neuroscience from Tufts University and a Master’s in Public Health (MPH) in Community Assessment, Program Development and Evaluation with a focus in Health Policy from Boston University School of Public Health. Walae also loves to celebrate joy by hosting community events with family and friends and finding ways to bring people together.

Siobhian is a Board Certified Pediatric Dentist who presently serves at the Director of Dental Services at Franciscan Children’s which is the only pediatric post-acute hospital in New England. Additionally she is a clinical lecturer of Pediatric Dentistry at the Boston University Henry M. Goldman School of Dental Medicine. Prior to her appointment at Franciscan Children’s, she was the Chief Resident in Pediatric Dentistry at Tufts University School of Dental Medicine where she earned the Dr. Leonard Carapezza Pediatric Dental Scholarship in 2020, which is awarded to the resident who has exceeded in achievements during their Pediatric Dental Residency Program. Before moving  to Massachusetts, she worked as a Regional Dental Director for a national Dental Support Organization in the Washington, DC metropolitan area and has over 10 years of clinical experience. Dr. Sprott strivesto make public health an integral part of her clinical practice; she has a strong motivation for understanding oral health care delivery from an organizational management perspective that engages the community. She currently serves on the Oral Health Advisory Committee for the Commonwealth of Massachusetts and sits on the executive boards of the Bay State Chapter of the National Dental Association and the Allston-Brighton Health Collaborative.

Dr. Sprott was a 2020-2021 Joseph L. Henry Oral Health Fellow in Minority Health Policy at Harvard Medical School and obtained her Master of Public Health Degree from Harvard T. H. Chan School of Public Health with a concentration in Public Health Leadership in May 2021. She received her dental degree from Howard University College of Dentistry in 2008 and completed a General Practice residency at Howard University Hospital in 2009. She also earned both her Bachelor of Science and Master of Public Administration degrees from Southern University and A&M College, Baton Rouge, LA, in 2002 and 2004 respectively.

Peter was born and raised in Brighton and has worked in a variety of roles for the last twenty years in the Boston Public School system. Currently, Peter is working at Brighton High School as the Director of Culture, Climate, and Student Advancement.

Our work is made possible by the Charlesview Charitable Fund